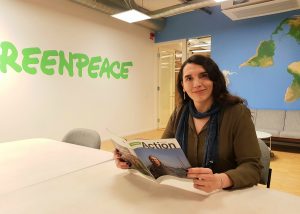 As Technology and Finance Director for Greenpeace Nordics, Magali Reyes Henkel has extensive experience of working within the not-for-profit sector. And as an Executive MBA alumni, she appreciates the value that experiences from the corporate world can add to the sector…

It’s not common for senior level executives in not-for-profit organisations to have MBAs, but it should be. It makes perfect sense – particularly for those working in global operations trying to make a real, lasting difference. I’ve worked in several over the years since I left my home country of Mexico and whether I’ve been collaborating with Greenpeace, World Vision or Bioversity International, an MBA had always been at the back of my mind. In fact, an MBA had been a life objective of mine since I was 17 years old.

I’ve worked in places as far-flung as Japan and South Korea and it was when I was at a QS Top MBA fair in Seoul in 2017 that I first talked to CBS and started to investigate it seriously. They gave me a different way of looking at things and suggested a Global Executive MBA might be more suitable for me because of my international experience. I’d also always had in my mind to study in Europe, and CBS was certainly appealing for its focus on sustainability awareness and responsible corporations management.

Having lived three years in Amsterdam previously, and after seven years working in Asia, I wanted to get back to Europe. So, for two years following that fair I did my research into all sorts of European destinations. London and Rotterdam were both possibilities, but this was going to be a once-in-a-lifetime experience for me and I wanted the very best fit. For me, CBS had everything. They understand what not-for-profit is all about; there’s balance of courses and culture; the CSR course is very strong; and I also liked the idea of 11 weeks of face-to-face modules. It ticked all my boxes!

In my line of work, the organisation’s cause is paramount and in some instances that can promote strategies that might be outdated or merely reinforce the status quo. It’s worth stepping outside all that and learn about the latest trends, seeing how things are being done in different sectors and build upon it.

Part of that depends on meeting and learning from different people with different backgrounds. My class included a few people with ties to the oil industry – about as far away from Greenpeace’s agenda as you can imagine – and while there were some vigorous debates, it was important to experience the perspectives of others. Because crucially, the world is at a critical moment and we can only get to where we need to be by working together. Collaboration rather than confrontation might prove to be the way forward in the years to come.

My hope is that this mindset will further permeate business practices, going beyond the green-washing practices we see often today, and genuinely strive for the highest standards in sustainability and human rights will become even more widespread throughout the corporate world. It will be interesting to witness this mental shift, which is undoubtedly important to the executives of tomorrow.

Looking to the future

My career journey is far from over and I’m certain that I’ll be able to apply many of the tools I’ve learned around leadership during my MBA to my future roles. In addition, the entrepreneurial facets of the course will help me with a clothing company that I’ve recently launched. Is that a conflict, given my not-for-profit background? I don’t believe so, it is actually an opportunity to embody those values. The rules are changing. The practice of business is evolving and it’s becoming more nuanced, more sustainable and hopefully someday, even a force for good.

In this, the second of our Insider series, Lone Ryevad Boysen, Admissions Manager for the Executive, gives us the lowdown on this highly relevant programme.
As an Icelandic supreme court attorney, Herdis Hallmarsdóttir played a key role in litigating one of the world’s biggest bankruptcies. But when she found breathing space in her schedule in 2018...