Before his Executive MBA (EMBA), Jesper Faurby (pictured below) worked various managerial roles in the trade credit insurance organisation, Atradius. Despite this, he was ready to take the next step in his career. When several senior managers were resigning from their positions in the company, Jesper seized the moment; he enrolled in the Copenhagen Business School (CBS) EMBA to embark on his executive journey and develop his leadership skills.“I wanted to have a place in Atradius’s succession plan,” he explains. “I’ve been in the industry for quite some time, and I saw the EMBA as an opportunity to broaden the scope of what I could do.” Jesper was able to do just that. From January 2022 he’ll be managing the Atradius entity in Denmark. He’ll be responsible for both the organisation’s commercial and non-commercial functions.

Here are three key leadership skills he developed on the EMBA that you need to transform your career.

1. Don’t focus on the individual, engage in leadership

Magnus Larsson, a leadership professor at CBS, explains how we’ve increasingly romanticised leaders throughout the past few decades; leadership has now become an identity project that focuses on the self. Yet for Magnus, this way of thinking is incorrect. To him, a good leader is someone who has the capacity to engage in leadership.

“When looking at a leader, most of it has nothing to do with leadership”, he says. “Leadership is a practice; it happens between people. We need to make the distinction between leaders and leadership.” 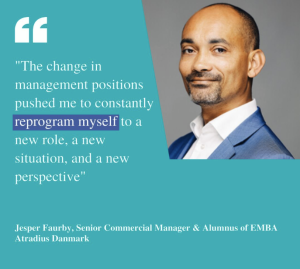 In the first two semesters of the CBS EMBA, leadership modules begin to build students’ executive capabilities and leadership skills. The first module focuses on contemporary leadership theories and practices that develop your understanding of your own position within a company, as well as how to manage your HR resources more effectively. Module two provides time for executive students to reflect on their own personal leadership challenges.

“Leadership was the one course that really stood out to me,” Jesper recounts. “It had the biggest impact on my position at Atradius and was a huge help to me when stepping up to a management position and understanding myself in the context of leadership.”

It’s now become evident that the greatest of leaders are the ones who can manage crisis situations by adapting effectively to new environments.

“We utilise theory as a resource to challenge our everyday understanding,” says Magnus (pictured above). “We need theories that have the capacity to challenge, not confirm, our everyday beliefs and consequently produce more complexity.”

During leadership sessions, Jesper regularly debated leadership theory with other classmates. Magnus also often set up forums where students discussed their leadership problems with their peers. Jesper learned to adapt, not only through this leadership training, but also when diving into different disciplines across his EMBA. These disciplines included financial statement analysis, corporate finance, and marketing.

“As my career has been very commercially and market-driven, there were a lot of disciplines where I lacked deep insight,” he says. “The EMBA gave me the opportunity to lead different functions moving forward, in a more enlightened context.”

Jesper continued to broaden his knowledge and adapt to new environments through the EMBA’s field trips. He traveled to cities like Shanghai, where he was able to visit businesses and gain new, non-Western perspectives. During the EMBA, he went through two promotion levels and began to manage an extra team. He was also able to apply what he learned from his EMBA directly to his work.

“The change in management positions pushed me to constantly reprogram myself to a new role, a new situation, and a new perspective,” he says.  In times of crisis, the first thing CBS teaches its students is not to act. Their task is not to solve a problem, says Magnus, but to mobilise others to resolve the issue at large. 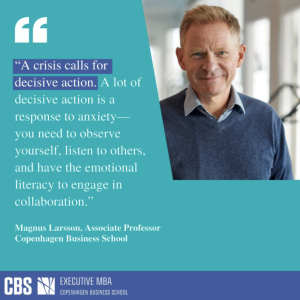 “A crisis calls for decisive action,” he says. “A lot of decisive action is a response to anxiety—you need to observe yourself, listen to others, and have the emotional literacy to engage in collaboration.”

Magnus encourages students to mobilise others to engage with the problem at hand, rather than immediately attempt to remove the uncertainty. This lesson has proved invaluable to Jesper, who has used his leadership training to mobilise others in his team.

“Today, I’m leading the whole account management team and our customer service team,” he says. “I’ve also been very involved in an innovation project, which was developed during the EMBA and is going to spread throughout our company.”

The innovation project is called Atradius Flow, where customers will be able to automate their transactions with credit insurance. As the project took place alongside his EMBA, Jesper was able to work with his team during the development process.  Ultimately, the leadership skills he developed meant Jesper was able to support his company and land a senior role at Atradius. Although he admits it took hard work, he recommends the program to those ambitious enough to put in the hours.

“For me, the EMBA was crucial to take that next step to a leadership position,” he concludes. “Before, I didn’t have executive leadership experience. The program helped me utilise new knowledge to develop my organisation in its future endeavors.”