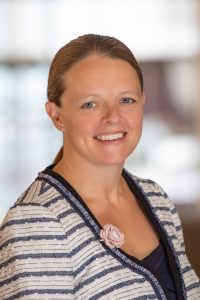 As a leading figure in Denmark’s shipping industry with a suitably demanding schedule, Dorte Thuesen Christensen had to structure her time carefully to study for her Blue MBA. But it was all worth the sacrifices as since then she’s become the VP for Operations & Claims at Hafnia, where she’s helped to transform the company and was instrumental in a large and successful merger.

I have always been ambitious and after a stint in the Royal Danish Airforce I wanted to try something different, so joined the shipping company, A.P. Moller – Maersk, as a trainee. The job was varied and took me to different parts of the world, but I eventually settled in Denmark to take up the position as the global Head of Operations for the Handytankers product tanker pool back in 2007. This led to various roles within Optimization and later Supply Chain, which gave me another angle on the tankers’ industry from a more technical perspective. I have always enjoyed studying, both out of interest and to challenge myself in a bid to stay relevant and keep on developing my career.

In 2015 I began to consider an MBA. I had been in the Head of Operations position for some time and was looking to get a global overview of the business; I wanted to gain more perspective of the financial side of shipping, for example. I had looked at ‘regular’ MBAs briefly, mainly for the networking side of things, but the Blue MBA at Copenhagen Business School is a well-known and respected qualification and I kept coming back to it. It more than made sense for me.

I could see there was a succession of impressive alumni and it was a broad curriculum. With kids aged one and three at the time I didn’t particularly want to travel to study – and I wasn’t interested in the opportunity to take a year out either – so being able to remain here in Copenhagen and study while holding on to my full-time job was perfect.

I was fortunate to get a scholarship for the cost of the MBA and my company agreed to support me in other areas also, which was a great motivator and pat on the shoulder.

Getting the balance right

Of course, there were some modules I found more relevant than others. The finance was insightful and I learned a lot on the supply chain module as well. It was real-world learning. I actually changed job twice during the course of the MBA, moving into supply chain, which meant that I got to practise my skills in a new, exciting area.

I am not the kind of person who does things by halves; when I am in, I am all in. I wanted to learn and to study and to be the best that I could be. I first and foremost wanted to live up to my expectation to me, and I also wanted to show to the company and the foundation who had backed me, that their investment was worth it. So I had to prioritise. This meant some sacrifices in my personal life to accommodate the necessary level of study and the wakeboarding and mountain climbing would have to wait!

With young children I knew I had to put some structure in place to be able to get everything done, which I deemed important. It was tough, but I prioritised three nights a week and one day at the weekend to study. That helped a lot and I got a lot of support from home, to pursue what I really wanted. It meant I could stay on top of things and then fit in breaks when I needed them; I still had time with my kids, had holidays and was able to work full time (including travel). This is probably not the way everyone would structure it, but it worked very effectively for me

Seven months before the MBA was done, I left Maersk to join BW Tankers Pte Ltd which was part of the BW Group. It was a younger company; with a relatively young fleet and I was brought in it to turn the operations around. I had doubts about moving on from Maersk, of course, but it was a great opportunity and I wanted to put my newly learned skills into motion. I knew what they were after and I knew I could do it.

This meant that unfortunately, the course work I had completed during the MBA was specific to my previous role, so I could not put all that work into my Integrated Strategy Project (ISP). Though it meant starting from scratch with my ISP, the course and the experience gave me the confidence to start over and I began creating a turnaround plan for my new company. In fact, as I was writing it, we were implementing it shortly after; It wasn’t just another piece of homework for school. It was a real company, a real challenge and real solutions.

We did not implement everything that I had described and recommended in my ISP and I appreciate that the best results always come from a team effort, so the collaborative effort that followed made it come to life. We turned the company around and made it competitive, and in the summer of 2018 the BW Group acquired the majority stake in Hafnia Tankers. Within a couple of weeks I had presented the CEO with a plan how to merge the companies, and given him my vision of what it could look like and that I was ready to lead this. That is how I got my current role; I knocked on his door and asked him to give me the job (and explained him why). In January 2019 we merged BW Tankers and Hafnia Tankers which has been an incredibly exciting journey so far – and I am sure there is more to come.

I am very happy in Hafnia, it is truly a ‘people first’ company and the next natural step for me career-wise would be a COO role, and I am also considering entering boards, where my competences and experiences match with the challenge ahead.

It has been some years since I graduated with the Blue MBA and I am back at CBS for the Executive Board education, which builds on my current skillset, challenges me and prepares me for the future. I still want to be the best I can be – CBS has been a vital part of my journey so far, and my ambition remains in sharp focus!

Are you ready to start your Blue MBA journey? Start planning for tomorrow by finding out more about your options with Copenhagen Business School today.

A leading light in the shipping industry, Capt. Michael Elwert is the Chief Operating Officer of Global Ship Management within V Group. Here, he explains how the CBS Blue MBA has helped shape his career – and how it continues to influence his working life today.
An experienced and respected leader in the maritime industry, Thomas Damgsgaard enrolled for the Blue MBA at Copenhagen Business School to boost his business toolkit and to help him navigate a fast-changing sector.
Adam Kobren was recently promoted to Head of Crewing for Maersk Drilling. In this post, he shares his thoughts about the CBS Blue MBA and the tools it has provided him with.