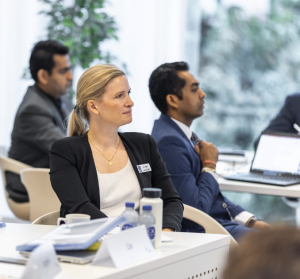 As a Regional Team Leader of Operations in Denmark with Torm A/S, Liv Kjaer knows that that the shipping industry is lagging behind other sectors when it comes to digitalisation. Through her senior role at a leading product tanker, she leads from the front with the advocacy of modern techniques through the educational path of the Blue MBA.

“The shipping industry has failed to embrace of the opportunities to adapt business processes to digital technologies. I think my industry is 10 years behind in digitalisation,” says Kjaer.

“Vessels are only now getting fully online with live chat functions and video calls, and we still have paper bills of lading in three originals – originating from back in the days when these were transported by horse, pigeon post or at sea.”

“We live in a world where most people can use smartphones, so it’s baffling that we don’t see more iPads and tablets being used on board for documenting technical matters, reporting timesheets, or connecting ship and shore. From an operational perspective, it is now important to build the the connection between ship and shore. A key focus in the industry is moving its optimising voyages through digitalisation.”

Kjaer has been running operations in the shipping industry for over 15 years. The last eight of which has been as a Senior Operations Manager – she has recently been promoted to Regional Team Leader, Operations DK. She chose to enrol in the Blue MBA because she felt accomplished in her personal life, and felt the desire to pursue more challenges in career. She completed a mini-MBA in 2016 which gave her a taste of what real MBA could be in the long run.

“The Blue MBA was the perfect choice; it’s given me the opportunity to dive deeper in this industry, expand my network among essential professionals in the industry, and utilise my expertise from the past 15 years to give something back to my company which has invested so much in me (now also with this MBA journey).”

So how will the Blue MBA support Kjaer in her career motivation to modernise the industry?

For starters, the shipping industry is notorious for being a male-dominated industry.

“There is a need for female leaders and role models for the next generation to come in this industry. I anticipate that the Blue MBA will give me the competences and confidence to climb this ladder and achieve my goal of being a leader. The Blue MBA is my step towards the next job-title.”

Digitalising the industry requires participation from all positions across the industry and Kjaer is a key player. She runs advanced support systems, such as maritime software provider Veson’s IMO’s Platform, and she is a “super user” – meaning that all related commercial trouble-shooting, upgrades, testing of new features, and attending related courses for the platform are essential aspects of her role.

For the past eight years, she has been commercially responsible for the VIP support system.

“I support our worldwide operations departments in using the system correctly and getting the most out of it, and ensure it is customised to the needs of our organisation. This super user role also requires that I have a certain curiosity in learning new features and examining the existing ones to optimise the system to our needs.”

“The system is only as good as the input is – so it’s up to our commercial team to get the correct data into the system,” she underlines. “The system is then capable of handling the data in various ways and providing valuable output on the other end. A daily workflow would be for example – the chartering department runs calculations for a voyage of a particular vessel; once fixed, the voyage budget is then passed on to the operations department so that it can process the entire voyage. Once the voyage is complete, the system has an expansive amount of data which can provide statistics on future budgets, how to optimise the performance of the vessel, time management, etc. There really is no limit to the amount of data we pull from the system and we operate a fleet of 80 vessels that perform more than 600 voyages a year.”

“It’s important to note that the system also connects numerous stakeholders on the voyage. Our operations department is the key manager of the system and responsible for validating the input so that the output for the various stakeholders is reliable as well as useable. The system is the foundation for commercial data collection in the company.”

Kjaer says, “For me, no two days are alike and handling the operations of several vessels requires a lot of post-its and to-do-lists to make sure crucial things are not forgotten. Stakeholders are informed in a timely manner and budgets are adjusted correctly.”

“The VIP system can be thought of as my ‘wingman,’ because it’s a place where I can create a reminder to prepare a freight invoice for the customer prior to the ship reaching the final destination on its voyage or where I can have automatic reminders whenever a vessel calls at, for instance, West Africa to make sure all operators across the company inform our security department, so we are well prepared both commercially and onboard the vessel.”

“I can also update the status of a port so that the crewing department can confirm flight tickets for the next crew to board or search for historic port expenses based on all our previous calls at a particular port.”

“When I started as a trainee I would keep track of these things in a notebook – but today the system allows us to share knowledge across the world.”

Kjaer trained with Clipper Tankers, Copenhagen, a company which these days is part of MOL Chemical Tankers, Copenhagen, and she later became an operations manager with Nordic Tankers (USA) LLC, Stamford, and managed that company’s largest contract of affreightment for the trans-Atlantic trade and the operation of several parcel tankers in the Caribbean. She moved to Torm A/S in January of 2014, and she has intensified the all-round commitment so vital to her command of IT capabilities today. Kjaer aims to be a leader in the industry and to increase and modernise with digitalisation.

If you would like to learn more about the Blue MBA and digitalisation >> you can download the brochure, request a virtual or in-person coffee meeting with Irene Rosberg, or visit the webpage.

This feature was adapted from it’s original publication in All About Shipping.

The Executive MBA in Shipping and Logistics, also known as the Blue MBA, is developing key professionals that will lead the sector towards a greener and sustainable future.
Blue MBA ambassador Saunak Rai – Head of FueLNG – reflects on his experience at CBS. After many years at sea, Saunak endeavored to broaden his knowledge of shipping and logistics and signed up for the Blue MBA using his own money.
Shipping exec based in Texas, USA, Sofia Drakou has chosen to study for her Blue MBA at CBS – a distance of over 7,000kms. The course requires her to make the round trip to Europe every 10 weeks, but after just a couple of months Sofia believes that the commitment is already …